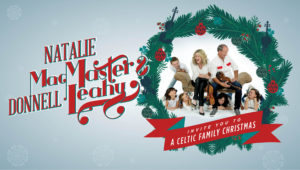 TORONTO, ON – JUNO Award-winning fiddle virtuosos Natalie MacMaster and
Donnell Leahy are hitting the road again to bring back their successful concert series A
Celtic Family Christmas. The intimate and unique show will see the duo perform with
their incredibly talented children, playing holiday favourites that are fun for the whole
family.

“Christmas is where this whole concept started, and we are excited to be travelling as a
family,” says Donnell Leahy. “It’s a perfect time to travel with the children and bring
light and happiness to families and fans across the country.”
This year, A Celtic Family Christmas — which contains a soon-to-be-revealed
theatrical element that will thrillingly traverse time and continents while contextualizing
the music and its players – touches down at marquee venues across Canada,
confirming the duo as powerhouses on the seasonal circuit. With a lineup of familiar
Christmas songs intermingled with classic Celtic songs sure to warm your heart, A
Celtic Family Christmas brings you in the door, and welcomes you in as part of the
family.

The accomplished duo has toured extensively over the years both together and
separately, selling out venues across the continent. To fans of fiddle music, Natalie
MacMaster needs no introduction. The Order of Canada recipient has released 11
albums, won two JUNO Awards, 11 East Coast Music Awards, has been nominated for
a GRAMMY Award and collaborated with artists such as Yo-Yo Ma, Jesse Cook,
Alison Krauss and more.

Donnell Leahy is a 3-time JUNO Award-winner, with internationally acclaimed musical
group Leahy. He is widely recognized as one the best Celtic fiddlers in the world and is
known for his high-energy playing style.
The A Celtic Family Christmas 23-date Canadian tour will begin in Victoria, BC on
November 23 and wrap in Peterborough, ON December 22.
“If you really love fiddle music, there are performances here that are nothing short of jaw
dropping … performances that will raise you up and performances that will leave you
misty–eyed,” – The Guardian