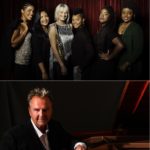 Jane Bunnett & Maqueque’s “Oddara” was released on October 14, 2016, and went Top 10 on the Jazz Week Radio charts, and received four star reviews in both Downbeat and Jazz Week magazines. Multiple Juno Award winner, Jane Bunnett has turned her bands and recordings into showcases for the finest musical talent from Canada, the U.S and Cuba. She has been nominated for Grammy Awards, numerous Juno Awards, received a Order of Canada, The Queens Diamond Jubilee medal, and most recently Ontario’s Premiers Award for Excellence. An internationally acclaimed musician, Jane Bunnett is known for her creative integrity, improvisational daring and courageous artistry. Her exploration of Afro-Cuban melodies expresses the universality of music and her ability to embrace and showcase the rhythms and culture of Cuba has been groundbreaking. She has toured the world bringing her own special sound to numerous JAZZ festivals, displaying her versatility as a tourist, saxophone player and pianist. As an educator, spokesperson and social activist, she remains unafraid to explore uncharted territory in her quest for excellence!

Peter Kater’s “Dancing on Water” was released on September 1, 2017. Multi-platinum selling Pianist/Composer Peter Kater has been leading innovator of contemporary instrumental music for over 3 decades. He’s received many awards and accolades for his rich and diverse music including 12 Grammy Award nominations. A prolific composer, he’s released over 60 critically acclaimed recordings and has scored the music for over 100 television and film productions including 11 On & Off-Broadway dramatic plays. From solo piano and contemporary jazz ensembles to full orchestral works his music is heard all over the world crossing many genres from the Olympics, the Kennedy Center and Carnegie Hall to the treatment rooms of hundreds of thousands massage and healing practitioners. He is known for his many groundbreaking collaborations with musicians such as Native American flutist R. Carlos Nakai; Tibetan flutist Nawang Khechog; Sting guitarist Dominic Miller and Sacred Chantress Snatam Kaur. And as avid environmentalist and humanitarian Peter is a proud recipient of the Environment Leadership Award from the United Nations.