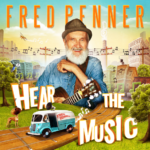 “This album is dedicated to all you ‘Fred Heads,’ young and old who have travelled with me on this musical journey,” Fred says. “Considering I’ve been on the road for 45 years, there are now three generations of families who continue to inspire me to make music.”

Fred Heads are a growing phenomenon – Generation Y and millennial hipsters whose early childhood was spent listening to Fred are now showing up as adoring 18 – 35 year old fans at Fred Penner concerts at clubs, colleges and universities. They include many popular new recording artists, a number of which jumped at the chance to work with Fred on Hear The Music.

Fred Penner could be forgiven for wanting to hang up his guitar and just relax.

There’s also his performances alongside luminaries including (but not limited to) Gordon Lightfoot, Burton Cummings, Randy Bachman, Raffi, Sharon Lois & Bram and Buffy Sainte-Marie; his status as the first kid’s performer to headline the Los Angeles Amphitheater; his honourary doctorates and his prestigious Member of the Order of Canada and Member of the Order of Manitoba.
Oh, and let’s not forget his winning turn as emcee of the cutting-edge 2015 Polaris Music Prize or his altruistic, globe-trotting work as an Ambassador for World Vision.

All fabulous and notable. But at the end of the day, Fred loves making music and connecting with audiences of all ages. And so, despite a resume as long as it is glittery, Fred Penner is set to return with lucky album number 13, Hear The Music.
Says Fred: “Hear The Music brings me together again with my dear friend, producer Ken Whiteley, who so lovingly guided me through the process of making this album. I am honoured to have worked with him and the wealth of passionate, talented musicians who provided their creativity and support on this exciting project!”

“I met Fred at Hillside after singing in a workshop with him a few years ago. He’s such a wonderful human and I was so pleased to meet him since I used to wake with the sun to watch Fred Penner’s Place as a child!” – Terra Lightfoot
“It was a very enjoyable experience for me. Fred has a sort of calming almost shaman like vibe and has a good sense of humour as well. The session took no time at all and afterwards we had a nice breakfast at Grapefruit Moon.” – Ron Sexsmith
“Working with Fred was nothing short of a dream; we set up in the comfort of Caroline’s kitchen on a sunny day and recorded our three voices all together. Being part of this project has been a real honour – we consider Fred a great friend and fabulous musician.” – The Good Lovelies

With 14 songs played by an acclaimed roster of musicians (jazz bassist George Koller, saxophonist Mike Murley) and with Fred himself on guitar, ukulele, harmonica, flute and jawharp, Hear The Music truly has something for everyone.
“I’ve known Fred for over 35 years, including making four albums together,” says producer Ken Whiteley who added guitar, banjo, mandolin and piano to the new album. “I’ve watched generations embrace Fred’s music and it’s been wonderful to see not just kids and families but lots of young adults excited by his work.

“Fred came into this project with a batch of great songs. It was fantastic to see his growth as an artist – musically, lyrically and philosophically. The focused, clear voice and the positive twinkle in his eyes were still there but deepened and enriched with maturation.”

No doubt about it: Hear The Music is a wonderful achievement in a career chock-full of them and a terrific reason for Fred Penner to hit the road for a series of highly anticipated shows throughout 2017. Really, why retire when the ears of the whole world are waiting?

Go to www.natalieanddonnell.com »       Back to Linus Main »